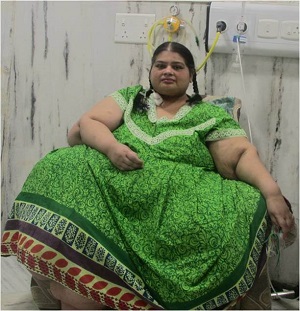 On Wednesday, Rajani spoke about her life-changing transformation from 300 kg to 86 kg and her quest to get into The Limca Book of Records.The surgeon who performed bariatric or weight-loss surgery on Rajani, Dr Shashank Shah, claimed 42-year-old Rajani was the heaviest woman in Asia until she reduced to 86 kg. Prior to surgery, life was a mess, said Rajani who needed help to perform even the most basic activities such as walking and changing clothes. I was bedridden for eight years. I never once left my house in all those years, never saw sunlight. I was depressed, she said. The sight of her would scare her six-month-old nephew who used to start crying on seeing her, she added. But his parents would make him spend time with me daily, & she said.

Apart from being obese, Rajani also had kidney dysfunction, type II diabetes and breathing problems. The pivotal moment came when Rajani met Dr Shah, who has performed 6,000 bariatric surgeries till date. Obesity is the mother of all diseases, including cancer, and is more common among women than men, said Dr Shah. Obesity now affects every third Indian, he added. Not surprisingly then, doctors say bariatric surgery, though complex and costing between Rs 3 and Rs 5 lakh, has takers in India.  Bariatric surgery involves reducing the size of the stomach so that it can hold a smaller portion of food, restricting the amount of food that can be consumed so that it results in weight loss. Considering it is a major surgery, it carries risks such as infections, blood clots, kidney failure due to diabetes and so on. Rajani admits she initially refused to undergo the procedure because of the side-effects. But Dr Shah eventually convinced me, she added. She underwent two bariatric surgeries at Lilavati and Hinduja hospitals. The medical team monitored her for 30 days after surgery, giving injections to prevent blood clots and carrying out physiotherapy and breathing exercises. I am in heaven now. I can wear what I want and eat normal food. After the surgery, I traveled across India, said Rajani.

Do catch complete article and video on:-