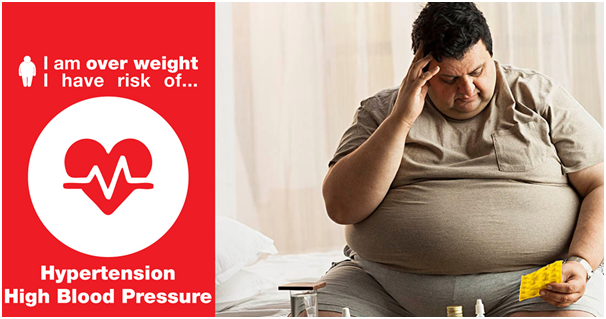 Hypertension or high blood pressure is the force with which the blood pushing against the artery wall is too high. Any blood pressure above a mark of 140/90 is called blood pressure and above 180/120 is called severe. The significant rise in obesity is found to have a direct correlation to risk of high blood pressure. Obesity and hypertension together can give rise to an array of health issues and challenges there by affecting health, quality of life and life expectancy. Apart from just weight and obesity the fat distribution is also an important factor that plays a major role. Abdominal Obesity or central obesity around the waist circumference is the influencing factor for developing hypertension.

Hypertension and Obesity have a major impact on both the following systems.

Snoring is the most common sign of Obstructive Sleep Apnoea (OSA). In people who are overweight or obese snoring and eventually sleep apnoea is one of the most common co-occurring problem. In obese people the fat deposits in the chest and waist circumference or central obesity causes the lungs to get compressed thereby restricting the airflow thereby dropping the oxygen saturation. People who have chronic sleep apnoea experience sudden drop in their oxygen levels thereby increasing the blood flow and putting a pressure on the blood vessels which increases the blood pressure. This kind of a situation can be a silent killer as they could lead to serious complications like stroke or heart attack.

Is there a solution that can treat all these problems?

Bariatric Surgery can be a treatment for all these health problems all in one go. Bariatric surgery brings about a significant and long-term change in the weight and also brings about a significant drop in the blood pressure levels. As the person starts losing weight, the pressure on the heart to work hard and to pump more blood reduces, thereby reducing the strain on the arteries which in turn reduces the blood pressure. Once there is reduction in the blood pressure, the pressure on the small vessels going to the kidneys will reduce and will enhance the functioning of the kidneys.

Similarly, with the significant reduction in weight, waist circumference and reduction of fat deposits in the neck and chest region would open up the lungs that are compressed, improve the oxygen saturation and reduce the blood pressure caused due to the drop in oxygen saturation.

Thus one treatment can break the vicious cycle, improve health and quality of life.

India currently has the third highest number of obese people in the world after USA and China. With this significant rise in obesity there are other health problems that co-occur with it. One of the most common health problems linked to obesity is infertility. Fertility is seen to be significantly affected by a person weight and multiple studies and research have found a direct co-relation. Obesity is known to affect fertility not just in females but in males as well including affecting the sexual health as well.

Multiple research and studies have shown that it is safer to conceive after bariatric surgery than to conceive when you are overweight or obese.

The following points were noticed regarding Obesity and Infertility after Bariatric Surgery :

Thus Bariatric Surgery is a very important tool in not just improving fertility but also maintaining good sexual health and improving family and quality of life.

At LOC healthcare LLP Dr Shashank Shah has been performing Bariatric Surgeries for the last 17 years and he must have operated on over 1500 young girls who had healthy and normal babies post surgery.