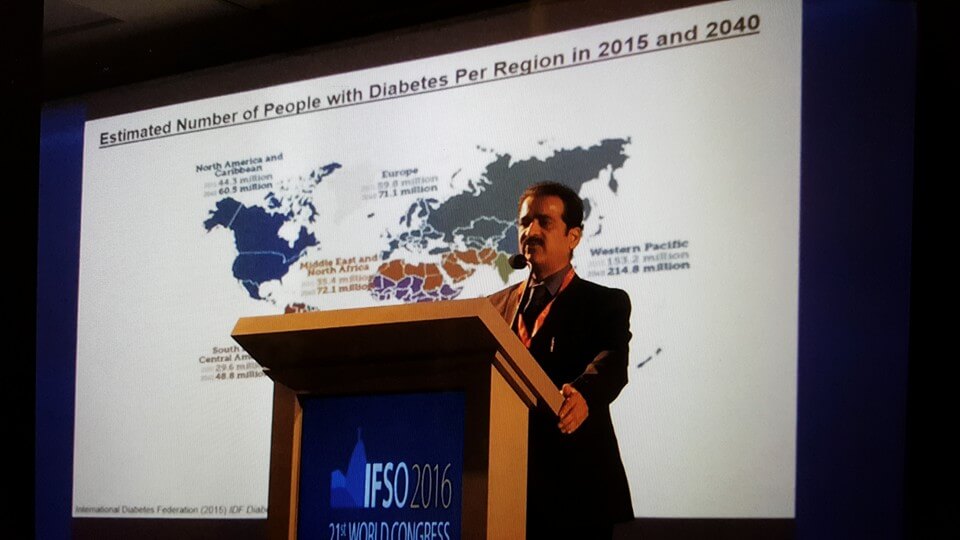 Team Laparo-Obeso Centre was invited for the World Congress of Obesity Surgery, IFSO Conference at Rio, Brazil 2016.  Four Faculties from LOC were invited to the conference.  With 15 presentations, the LOC team had the highest representation from any unit in Asia.

World Congress at Rio IFSO 2016 celebrates 50 YEARS OF GASTRIC BYPASS.  Sharing the stage with the pioneers is Dr. Shashank Shah, Co-Founder of Laparo-Obeso Centre, Pune and a surgeon with compassion for the low BMI type 2 Asian Diabetics.  An honor well deserved!  Dr. Shah shared the COSMID results of Gastric Bypass versus medical management for which he received the Vivian Fonseca award from the American Diabetes Association earlier this year.  He thanked the COSMID team and the Laparo-Obeso Centre Team for the contributions.

Dr. Poonam Shah, Co-Founder of Laparo-Obeso Centre, Pune, conducted an opening course as the Course Co-Director for Integrated Health. She has more than a decade of work as the pioneer Bariatric physician. This was a great recognition of her work.

Ms. Aditi also represented the LOC team as it was her first World Congress as a Speaker, Moderator And Presenter! She thanked the IFSO 2016 for such a wonderful experience!

Congrats Dr. Poonam Shah, Dr. Pallavi Shah, Ms Aditi and the whole LOC team and wish them the best for the future.