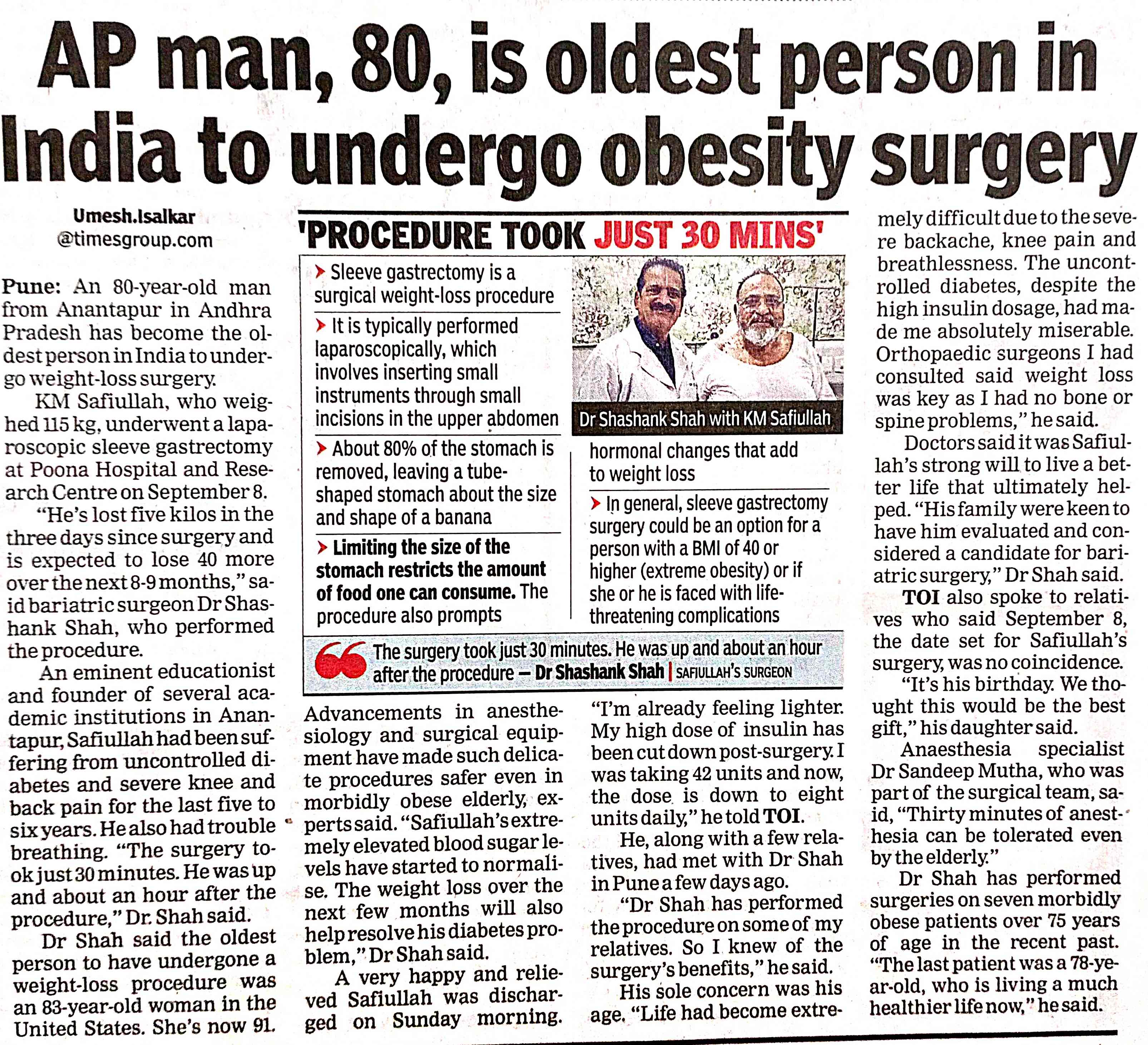 PUNE: An 80-year-old man from Anantapur in Andhra Pradesh has become the oldest person in India to undergo weight-loss surgery.

He's lost five kilos in the three days since surgery and is expected to lose 40 more over the next 8-9 months," said bariatric surgeon Dr Shashank Shah, who performed the procedure

An eminent educationist and founder of several academic institutions in Anantapur, Safiullah had been suffering from uncontrolled diabetes and severe knee and back pain for the last five to six years. He also had trouble breathing. "The surgery took just 30 minutes. He was up and about an hour after the procedure," Dr. Shah said

Dr Shah said the oldest person to have undergone a weight-loss procedure was an 83-year-old woman in the United States. She's now 91. Advancements in anesthesiology and surgical equipment have made such delicate procedures safer even in morbidly obese elderly, experts said. "Safiullah's extremely elevated blood sugar levels have started to normalise. The weight loss over the next few months will also help resolve his diabetes problem," Dr Shah said.

A very happy and relieved Safiullah was discharged on Sunday morning. "I'm already feeling lighter. My high dose of insulin has been cut down post-surgery. I was taking 42 unit and now, the dose is down to eight units daily," he told TOI.

He, along with a few relatives, had met with Dr Shah in Pune a few days ago.

"Dr Shah has performed the procedure on some of my relatives. So I knew of the surgery's benefits," he said.

His sole concern was his age. "Life had become extremely difficult due to the severe backache, knee pain and breathlessness. The uncontrolled diabetes, despite the high insulin dosage, had made me absolutely miserable Orthopaedic surgeons I had consulted said weight loss waskey as I had no bone or spine problems," he said

Doctors said it was Safiullah's strong will to live a better life that ultimately helped. "His family were keen to have him evaluated and considered a candidate for bariatric surgery," Dr Shah said.

TOI also spoke to relatives who said September 8, the date set for Safiullah's surgery, was no coincidence

"It's his birthday. We thought this would be the best gift," his daughter said.

Anaesthesia specialist Dr Sandeep Mutha, who was part of the surgical team, said, "Thirty minutes of anesthesia can be tolerated even by the elderly."

Dr Shah has performed surgeries on seven morbidly obese patients over 75 years of age in the recent past. "The last patient was a 78-year-old, who is living a much healthier life now," he said