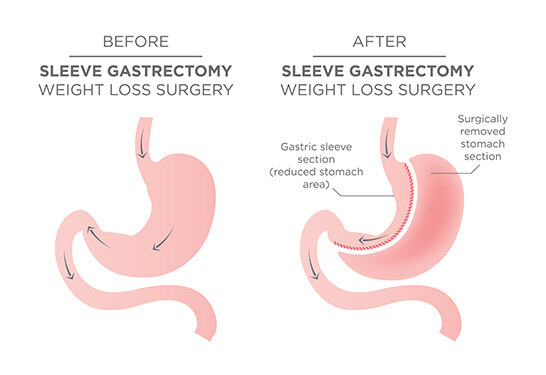 Sleeve Gastrectomy, also known as gastric sleeve surgery, restricts the amount of food you can eat by reducing the size of the stomach. The minimally invasive procedure removes a portion of the stomach, making the stomach roughly the size and shape of a banana.

Patients who have had a sleeve gastrectomy feel full after eating much less. In addition, the surgery removes the portion of the stomach that produces a hormone that can make you feel hungry, so you won’t want to eat as much.

This procedure can be an excellent alternative to gastric bypass, and it is a simpler procedure because it doesn’t involve rerouting or reconnecting the intestines. Also, the sleeve gastrectomy doesn’t require implanting a banding device around a portion of the stomach.

For certain patients, in particular those with a body mass index (BMI) greater thn 60, the sleeve gastrectomy may be the first part of a two-stage operation. In the staged approach, the operation is broken down into two simpler and safer operations. In the first stage, a sleeve gastrectomy is performed. This allows patients to lose around 100 pounds or more, making the second part of the operation substantially safer. Some people lose enough weight that they do not need any additional surgery. For those who continue to the next stage, the second procedure is usually performed eight to twelve months later, and the “Sleeve” stomach is converted to a gastric bypass.

How much weight did you lose one month after your gastric sleeve/bariatric surgery?

What are the benefits of gastric sleeve surgery?

Gastric bypass surgery is known as gold standard of bariatric surgery and is being performed for more than 4 decades.The procedure has strong diabetic and reverses diabetes. The procedure has restriction in form of samll pouch and malabsorption of fat and therfore the weight loss results published in long term are excellent. Beacuse the gastric poch is small and is a malabsortptive procedure patients needs vitamins , minerals and protein supplements for lifetimeGastric Bypass surgery is a laparoscopic or a keyhole day care procedure in which laparoscopically stomach is converted into a small pouch and a Y shaped intestine is connected to the stomach pouch. Patient can start working 3 to 4 hours after surgery and started on clear liquid after about 4 to 6 hours after surgery. Once the patient is well hydrated the patient can be discharged. Gastric bypass surgery is the best procedure for reversal of obesity and type 2 diabetes.

What is safer the lap band or gastric sleeve surgery?

In a Lap band procedure, the surgeon places an adjustable ring around the upper part of the stomach thereby tying off most of the stomach and leaving a very small area. There is severe discomfort if the patient over eats thereby aiding in weight loss. In a gastric sleeve surgery the greater curvature of the stomach pouch that secretes a hormone called ghrelin, excess secereting part of that hunger hormone is removed thereby reducing hunger and cravings. since Lap Band is Less consistently effective than other procedures. Additional adjustments procedures are required, The rate of complications may be higher, Many patients end up seeking revisions to sleeve gastrectomies Whne the two are compared sleeve gastrectomy is the best option amongst the two. Though more invasive and has a longer recovery time, gastric sleeve is way more effective with less probability of reoperation and complication