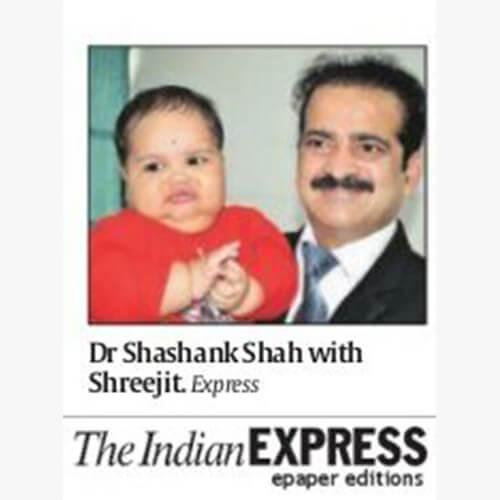 It has been a harrowing time for Amol and Rupali Hingankar from Bhosari whose confusion over the abnormal weight gain of their new-born son Shreejit soon rose to despair when he weighed an unbelievable 17 kgs at just ten months. Even as they are bracing for a tough battle ahead, some relief has come in the form of bariatric surgeon Dr Shashank Shah, who has decided to take up the challenge of treating this rare genetic disorder and helping the baby for the next five years. The ten-month old child, who weighs 17 kg and is 75.5 cm tall, is the second child in the country to have been detected with a rare genetic disorder leptin gene mutation, that causes obesity. Doctors, who have been treating him in Pune, refrain from undertaking surgery while desperately trying to obtain leptin injection from NHS, UK as the sole treatment for the child.

Dr Vaman Khadilkar, pediatric endocrinologist at Jehangir hospital, who has set up a genetic laboratory in cooperation with a molecular biologist Dr Phadke, detected this rare case and told Newsline that there was a similar baby several years ago in Mumbai. Dr Shah, bariatric surgeon and former President of Obesity Surgery Society of India, said that due to leptin gene mutation /deficiency, the volume of food consumed is almost equal to an adult volume. There is no feeling of satiety and there is a continuous craving for food. Shreejit can neither sit on his own nor stand, says mother Rupali. Shreejit's father Amol works as a security guard at the D Y Patil medical hospital and the duo has been praying that their child stops gaining weight. Because of this condition, Shreejit has delayed milestones and cannot walk even with support. Valgus is a condition in which a bone or joint is twisted outward from the centre of the body. He also suffers from breathlessness, says Dr Shah. The ten-month old baby has a daily diet of 6-7 biscuits, two litres milk and three chapatis with dal, and this is a lot in terms of quantity and calories consumed, he added. I am not keen on operating the baby and am working on ways where we can offer the best available treatment, says Dr Shah. The baby's legs are already deformed and after searching for world literature on the possibility of a surgery, we could identify only one such case. But this is too less an evidence for performing surgery on the ten-month old, he added. The surgeon has more than 3,000 bariatric surgeries to his credit and has operated on both a seven-and-half year old child and also the heaviest British person (310 kg). Dr Shah has promised the parents to adopt the baby and take care of the child for the next five years. We will write to NHS, UK if the leptin injections are available,he said, adding that very little is known about this rare disease. More than that, the disease gives clear indication to the common man that Hunger is a function of the hormone and not someone's nature or will power! This would help everyone understand that obesity is also a complex multifactorial hormonal disease.